But more than that, I think of these as projects kind of like those fitness bootcamps – intended to kickstart you into figuring out new habits and workflows. I might be wrong about that – see above re: never done any of these before – but that’s how these projects make sense to me.

And so they don’t seem appropriate for just doing what I would be doing anyway. And I have a ton of writing to do this month, but it’s writing with hard deadlines that are in December, so it doesn’t really matter if this is NaNo- or Ac- or Digi-i month – I’m going to need to be writing a lot of words anyway.

But still, all of the project posts I’ve been seeing have me thinking about process, and about being more proactive about setting time aside. So here’s the heavily revised and rewritten version of Chapter 6 of The Academic Writer as it exists after 3 hours of focus today. 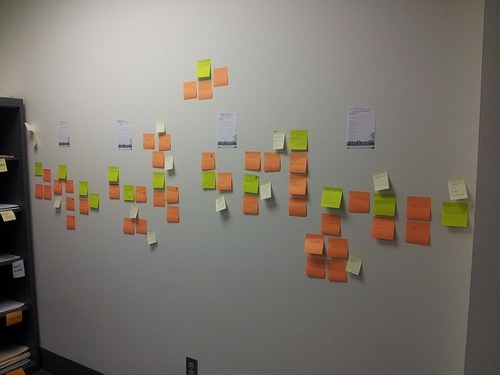 Of course, given the heavy-reviser-ness of my writing style* there is little to know chance that the manuscript I turn in in December will bear much relation at all to what’s up there on the wall. But at least now I have a starting point to start writing – so I can figure out what I really have to say, and how to say it.

*Meta alert. I learned about composition styles, including heavy revisers, in an earlier version of a textbook by Lisa Ede, which is now… The Academic Writer.