Unless there actually was a thing? This post isn’t about a specific thing, just about makerspaces and libraries.

I was at an event last week where a student from a local high school explained how his initial reaction to the word “maker” was that it was a buzzword, something not to be taken seriously.

And that was definitely my first reaction too. Even though I am a committed maker in that I make things and I make things a lot — makerspaces, maker culture, maker movement — these things just sound a little bit made up.

(I also tend to make things in that 19th century artisinal way that’s frequently mocked on Portlandia, not with 3-D printers, so there’s that)

About a year ago when I had some money left from the allocation that comes with my professorship and a really smart colleague who wanted to explore makerspaces, I thought that sounded like a good idea.

And now, after she’s been exploring and doing stuff for a year with some more of our colleagues, I’m really, really glad we did that.

What did we do?  We bought a 3-D printer for the library, we found or started tons of conversations around campus, and we built the outreach cart I talked about last month to take it all on the road.

(And by “we,” I mean Margaret and the team she put together)

That’s the webcam on our library 3-D printer.  The reaction to it has been pretty striking.  We have about 50 jobs in the print queue all the time, our students have been really excited, and the university put a webcam on it so y’all can watch it all day long if you want.

Flyer for A Community of Makers Event

Two weeks ago a lot of Margaret’s hard work turned into A Community of Makers — a keynote talk by OSU alum Travis Good followed by a lot of events bringing different campus and community groups together — including a Micro Maker Faire.

So why am i really, really glad — just because that event was fun and the 3-D printer has a bunch of stuff in the queue?

Well, certainly other people being excited is cool.  But it’s why they’re excited and how that excitement ties to some pretty core values of libraries that has me so happy.

Starting with something simple — the library is where people learn things.  That’s pretty basic, right?  I don’t have to explain or document that one? 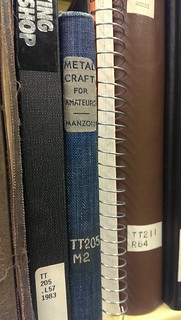 One piece from Travis Good’s talk that stuck with me was the idea that learning about things doesn’t look the same in a world where we have technology that makes us feel like we’re living the future plus a complex system of networked computers that makes it possible for us to share what we know in major new ways.  He acknowledged that making is not a new thing, but argued that in the past, making usually involved thousands of hours of apprenticeship and training, resulting in skills that were held by the few.

In some areas, technology now allows those skills to be shared by the many.  Using tools like 3-D printers, 3-D scanners and laser cutters, people can make things that used to take a different kind of skill/knowledge acquisition to make.  He argued that this accessible (to use) technology, plus the widespread availability of designs and patterns that have been shared on the Internet creates a world where people can jump in and play and learn by doing.

The library is the place where everybody can learn things.

And I mean this in a couple of ways —

But like a lot of research universities, our campus is pretty siloed.  The colleges do their own thing, and our students quickly identify as much with their college as with the school as a whole. 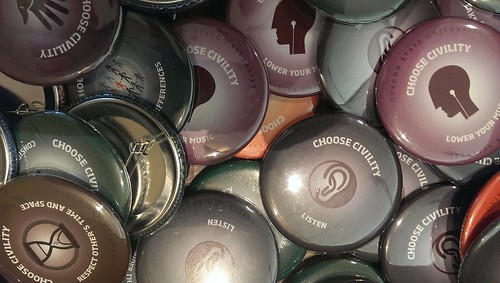 A couple of years ago we launched the Civility Campaign — a campaign to raise awareness and start building a culture of civility within the library space.This campaign took off like I don’t think any of us really expected — it got a lot of campus-wide and state-wide attention, and students embraced it.  Or at least they collected the buttons.

About a year after the campaign started, I was sitting on some focus groups the library was having about a new strategic plan. One thing that came out of those really stayed with me — there were people who said that the civility campaign “could only have worked in the library.”

The suggestion there was that because so much of the campus is turfed out – owned by one group or another – there’d be politics and baggage inherent in any similar effort to have this kind of campaign.  Our campaign has at its heart the message that the library is a shared space, not owned by any one group and open to all — they argued this could only have worked in a space that walks that walk.

Believe it or not — that idea has come up again with the 3-D printer.  We have all of this technology out there.  Some of it siloed by policy.  Some isn’t – but it’s still siloed by practice, or by location.

Let’s face it – it’s  hard to picture a student from any college but the College of Engineering walking into a COE building and asking to use their 3-D printer, no matter how much COE makes their stuff open to all.  And that’s true for any College – not just Engineering.

Before we got the printer we asked students what they would like us to do with a newly opened space in the library learning commons, and 3-D printing was #2 on their list — even though we knew (though they may not have) that they could see and use this technology on campus already.  Putting it in the library means that it is everyone’s — and students are more comfortable figuring stuff out on something that’s theirs.

Right now, the excitement and wonder at the new technology is pretty universal — but pretty soon, I’m guessing that won’t be the case.

We have a big huge SmartBoard in the library classroom.  I was going to take a picture of it for this post but there was a class in there so I didn’t.  I don’t know what class it was, but I know they weren’t using that SmartBoard because we hardly ever use it anymore.  When we first got it though — most of our students had never seen such a thing as a screen you could control by touch. It was magical.

Within a couple of years, students at the better resourced high schools had seen SmartBoards already.  And of course now, lots of people have touchscreens in their pockets.

I can see this coming with 3-D printing.  Right now, everyone’s excited – hardly anyone has seen it in real life.  Pretty soon, students from the better resourced high schools will come in and they will have used one already in AP chemistry or Intro to Engineering or something.  Not long after that, students with means will have them in their homes.

But there will still be others who won’t have had those experiences — and who won’t get them from their home departments at OSU.  The library is about access and about making knowledge available to all — I think this is what it looks like now, at least some of the time.  No one is going to learn about this technology in a book – you learn about it by doing it.

The other thing Margaret has been doing is starting and joining conversations around campus – bringing people together.  Like I said, we have a lot of siloed things happening on our campus — we also have a lot of partnerships and interdisciplinarity.  But the thing is, those usually only involve some of the players.

One thing that came up was how few spaces there are on a campus where the connections between fields and disciplines can be experienced — and that a traditional library collection provides one way of seeing those connections, particularly when it’s browsed.

This isn’t about the collection, or even the library space really — but that value – that broader view of knowledge and the connections within it – that’s a value that endures.  And that’s the value I’m seeing in these connections and conversations about makerspaces and learning by creating.  Everyone wants that connection to happen – everyone wants and understands the shared context – and the library – through its librarians – can provide the point that allows those swirling conversations to coalesce.

We’re an academic library, but we’re still our community’s library.  They still need us to be the place where everyone can learn, and where people come together.

We’re probably not going to build a makerspace tomorrow.  Or ever.  We don’t think that’s what our community needs from us.  There will likely be a makerspace on our campus, and soon — and the library will we right there.  Not in the stands, but on the ground, shaping what it becomes. And I’m excited about that.

One thought on “on the Makerspaces thing”