This is a guest post from my awesome colleague Laurie Bridges.  She’s been working hard over the last couple of years to expand and improve our outreach, instruction and programming for our very quickly growing international student population.

Laurie said that she had written up a lengthy description of her most recent innovation – a speed-friending event in the library that brings international students together with students from the U.S., so I asked her if she’d be willing to post it here.  She was, so here it is. 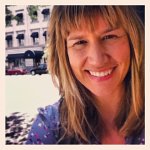 Approximately one year ago, I was passing through our University’s Memorial Union when I saw a poster advertising “Speed Friending.” The title, but none of the details, got lodged in my brain. Months later, while working with international students and listening to their stories, an idea popped into my head, “International students are in our library…maybe speed-friending would help them connect with domestic students.” I floated the idea by a few people, including Anne-Marie. Everyone I spoke with was supportive of the idea

(Note: it probably helped that our library’s strategic plan includes working toward “building community” within the library.)

To gather more information, and hopefully a plan, I contacted the Memorial Union to find out who had sponsored the speed-friending event the previous year. The staff looked through their calendar, and found no record of it. I then went online and googled “speed-friending” where I found a few mentions of the idea, some advertisements, but no information about how to organize and run such an event. Despite this setback, I mentioned the idea to a program manager at INTO OSU (our international English language program), Mary Hughes, and she was incredibly enthusiastic about the idea. We collaborated on the first event winter term, and held a second event spring term.

The most difficult part of the event is getting American students to register and then finding the “hook” to get them there; this is in large part why we offer free pizza and host the event in the evening around dinner time.

Libraries are often viewed as “safe” spaces on college and university campuses; they are spaces where students of all backgrounds come together to study and socialize. Libraries can and should have a role in helping students create an inclusive campus environment. We should all take steps to help prevent misunderstanding and create cultural bridges in our libraries.

The rest of this post is my “brain dump” about the events, organizing, planning, and assessing. Hopefully this will help more campuses and librarians organize their own speed-friending events and improve on the format and structure we have created.

(And please, send any ideas you have for improvement: Laurie.Bridges @ oregonstate.edu).

Because we only had room for 48 students, and wanted an even split between American/domestic students and international, I used the library’s subscription to Qualtrics survey software to setup an event registration page that allowed for “quotas”.

The day before the event, I sent reminders to the domestic students and Mary sent reminders to the international students. In the email I indicated, “If you have had a change of plans or are unable to attend, please let me know ASAP!.” Surprisingly, this resulted in an avalanche of cancellations from the domestic students—10 of the 24 registered students cancelled! Obviously sending a reminder the day before is extremely important; if I hadn’t sent the reminder, I think we would have been in dire straits and we would have had a lot of disappointed international students.

The Speed Friending event started at 6:00 with a planned conclusion time of 8:00. We had 40 participants (including Mary and myself). A total of 10 students were no-show; six domestic and four international.

The seating arrangement for the event worked well, although the acoustics in the room made hearing somewhat difficult. However, the excitement in the room was palpable and students didn’t seem to mind the elevated noise. We had each international student meet with each domestic student for four minutes. When it was time to switch partners we  simply turned on and off the lights in the room. Four minutes of talking with each student resulted in 90 minutes of talking. Because I participated I can say it was exhausting (I can only imagine speaking a second language)!

We split the cost of pizza, salad, and drinks with INTO OSU, which was delivered 90 minutes into the event. At that time, students sat wherever they wanted and continued conversations. Note: Many of our international students hail from Saudi Arabia, and because of dietary restrictions, it’s especially important to order extra vegetarian options. 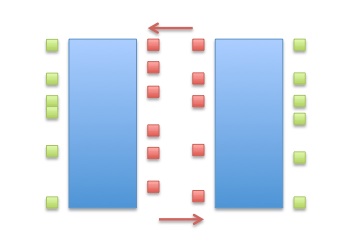 Here’s how the tables were setup (this is in no way to scale). The domestic/American students are represented by the red squares. They rotated every 4 minutes while the international students stayed in the same seats.

Photos were taken during the event and posted online afterward. In addition, these photos were used to advertise the Spring speed-friending event.

Students were sent a survey one day after the event. 16 students filled out the survey and all responses were extremely positive. The only complaint was one respondent who didn’t like pizza. Several suggestions were given, including more time for talking with each partner and a possible follow-up event to gather the same group of people together.

The second speed-friending event was a repeat of the first format, but with a few alterations based on our observations and student feedback:

One thought on “Guest Post! Speed friending in the Library”