There’s something about spring term that’s always crazy.  Last week was my last presentation obligation of the term – the WILU conference in Montreal.  WILU is one of my favorite conferences, based on the one time I’ve been before, and luckily we presented on Tuesday, so I was able to enjoy most of it without imminent presentation pressure looming over my head. 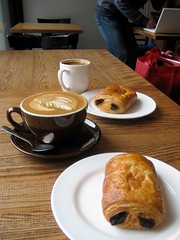 Kate and I presented on some very early findings from a research project we have been working on for the last several months – examining stories that instruction librarians tell.  I told Kate at the end that if I ended up blogging about this presentation at this early stage, it would be to write something up about how incredibly valuable it can be to present on research in the early stages, even in the very early stages. Basically, the segment of the research that we presented on at WILU was drawn from an online survey where we asked instruction librarians to share some stories.  Our interest is … epistemological.  We were hoping to identify some themes that would suggest what we “know” as instruction librarians and professionals, as well as  some ideas of what we talk about, worry about, and feel proud about when it comes to  our professional practice.  This work was primarily intended to inform another round of story-gathering, done as interviews, but we were also hoping that these preliminary results would be interesting on their own. ETA -it was brought to my attention that some more information about the kinds of stories we gathered might be useful.  This is the slide listing the prompts we used to elicit work stories.  They’re adapted from a chapter in this book.

So beyond the obvious benefit of a deadline and potential audience forcing you into your data to figure out what it might say early on, presenting even those early findings was a really positive experience.  For one, other people are as interested in the story method as we are, which is awesome. For another, a whole room full of other pairs of eyes is a fabulous thing.  Kate and I started the conversations that started this project talking about this conversation between Kate and I and some others (and further framed into reflective practice talk by Kirsten at Into the Stacks) though I don’t think it has stayed there.  There has definitely been research-question creep along the way. We started the project thinking about theory/practice, a is obvious from the conversation linked above.  And we made the connection to reflective practice based on that as well – based on the idea that scholarship represents another way of knowing what we know, and thinking about ways that scholarship can inform and push our reflections on practice. And we got a great question about whether it makes sense to conflate scholarship with theory in this context, especially when, as another commenter mentioned, much of the LIS literature isn’t clear when it comes to any theoretical frameworks the author used.  A really useful question to think about that scope of the project creep – and also exactly the kind of question I can never answer on the spot. Theory vs. practice is useful shorthand, especially in a short session like these were.  And I do think that including non-theory generating scholarship in the initial conversations that sparked the project reflected some of the ambivalence we were seeing.  As I said at that time, I really don’t think all of that ambivalence is tied up in “if the scholarship in librarianship was more useful, or more rigorous, or more scholarly, or better-written, or  more theoretically grounded, I would totally use it.” I also think that Schon’s Reflective Practitioner allows these things to be discussed together as well, not because he conflates them, but because he sets the Reflective Practitioner in contrast to both the pure theorist and the applied scientific researcher:

As one would expect from the hierarchical model of professional knowledge, research is institutionally separate from practice, connected to it by carefully defined relationships of exchange.  researchers are supposed to provide the basic and applied science from which to derive techniques for diagnosing and solving the problems of practice.  Practitioners are supposed to furnish researchers with problems for study and with tests of the utility of research results.

Schon argues that this hierarchical model of professional knowledge has dominated the way we understand, and teach, professional practice – and it is in both the development of grounding theory (basic, disciplinary knowledge) and the development of a body of rigorous, scientific applied knowledge for problem-solving that the practitioners, and the practitioner’s unique ways of knowing, are left out of the equation. Which is a long way of saying that the initial connections we were making still have value for me mentally when thinking about these questions, but I’m not sure we want to stop there.  All of this begs the question of whether thinking about these questions, and thinking about the stories, with a clearer distinction between theory and practice in mind might be more useful.  I think maybe it would be.  On the one hand, clarity is good, and a lack of clarity in prior discussions might actually suggest the need for more clarity all by itself. But the conversation brought a couple of additional thoughts to the forefront, neither of which were really clear until the mental presenting-dust settled. Here and there along the way, I’ve been thinking about the real-world information literacy literature and its connection to this discussion.  One reason to not discuss it in our 30 minutes was the fact that some of what I have read in that literature recently (as relates to real-world information literacy in professional contexts) examines the differences between the ideal knowing captured in our professional texts/ training/ theories and the real-world/ tacit/ experiential knowing that comes with actually dealing with the uncertainty of practice.  The connections to our original questions probably seem clear, but I wasn’t comfortable calling the peer-reviewed literature our abstract, ideal text-based knowing in the same way as the firefighter’s manuals were understood in this article, for example. Which on the one level is part of the subject of our next steps with this project – figuring out what our abstract, ideal, text-based knowing IS in instruction librarianship.  But on another level points to the problems with conflating theory and scholarship – parsing them out more clearly I think would make the connections to this body of literature more useful. Related to this comes the question of our training (or lack therof) as instruction librarians, in LIS education and after that.  Between us, we saw several sessions about professional development for new librarians, which dovetailed with conversations we’d had about the distinction between the stuff we read related to information literacy in grad school and most of the stuff in the literature today. Kate mentioned that the articles she read in library school instruction classes weren’t the articles about practice, but about theory.  I didn’t take a specific instruction class, but I would say the same was true at my school, and was definitely true in the learning theory class that I took.  I think to follow up on that question usefully will also require parsing that discussion more clearly. So thanks to all of the people who participated in this great (for us) conversation, and we’ll be contacting people soon for the next round of work on the project. Final lesson from WILU?  I’m still useless when I try to speak from notes.  Not necessarily the speaking part, though it is defintiely not natural for me, but more the actually using the information in my notes part.  I tried in this talk, not throughout but just in one moment at the end, and I still made a total mess of the process.  I walk away from them, get lost, talk past where I am in the notes, and leave things out anyway.  It’s weird that speaking from notes is as much a learned skill as speaking without them is, but it totally is.  I think I blame high school debate, and I suspect it’s too late for me now.

2 thoughts on “mental debrief from WILU”