Remember a couple of weeks ago when news articles like this, or this or this were all over your social media?  Mine too.  I’m a little late to replying, but I didn’t want to do it until I’d read the actual study.  I read a couple of the news articles and something about the coverage was bugging me.  Me, an avowed taking-notes-by-hand-notetaker!

Today, I read it, and I think I know what’s been bugging me.  It’s that when we didn’t have the tools that make things easy, we learned a lot, so the tools are bad narrative. 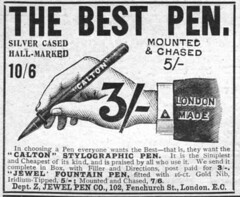 So when a new technology comes that removes the barrier we love it and adopt it, but worry about everyone who isn’t going have the important experience of getting over the barrier.  Or worse, we look at those who grew up without the barrier and decide that they’re deficient in some way.

Does this sound familiar?  Of course it does.  How many times have we heard variations of it in libraries?  A million?  A zillion?

First, a quick recap of the study

(I crack myself up, it won’t be all that quick)

Context:  There are 2 main theories about the value of notetaking that were considered here:

Since laptops enable a more transcription-like type of  notetaking, the authors hypothesize that they will find benefits to pen-and-paper notetaking over laptop-supported notetaking and they designed 3 related studies to test that:

Study 1 — let’s compare laptop notetaking to paper notetaking, without doing much else.

2 groups of students were asked to take notes on the same material, with no instruction on how to take notes.  They were randomly assigned laptops or pen/paper to do the task. Afterwards, they answered both factual/recall and conceptual/application questions about the material.  In addition, their notes were coded and analyzed by the researchers.

Both groups of students did about the same on the factual/recall questions, but the students who took notes by hand did significantly better on the conceptual/application questions.

Those who took notes in longhand wrote fewer words, and had fewer examples of direct transcription in their notes.

Study 2 — let’s do pretty much the same thing, but this time we’ll tell them not to transcribe. 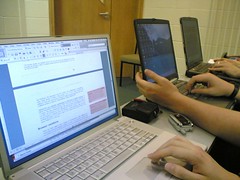 So this time the students essentially did the same thing, but the students who got laptops were split into two groups.  One of those were told to take notes as they usually do, the other was also told that studies show transcription doesn’t work, and that they shouldn’t transcribe.

In this case, the differences between the groups were less significant, but the handwritten notes group still did better.  There was no difference in the laptop groups — inserting a paragraph telling students “don’t transcribe” didn’t have an effect.

Study 3 — this time, we’ll have them study the notes again later.

Instead of TED talks, four prose paragraphs were selected and then read by a grad student from a teleprompter to simulate a lecture. The paragraphs included 2 “seductive details” — information that is interesting but not useful. Students were told they’d be tested later before they took their notes.  Again, some were given laptops and some were given pen and paper.  A week later they came back, half were given the chance to study their notes for 10 minutes, half weren’t.

The results here were more complicated.  You have to look at the intersection between notetaking medium and study time to find significant differences.  Those who took longhand notes and studied did better than any other group of conditions. Additionally, among those who studied, verbatim notetaking and transcription negatively affected performance.

Okay, enough recap, on to my thoughts:

(For more details about the study — see the end of the post. It’s paywalled, so I’m feeling responsible for making sure you have the details the news articles don’t include)

I want to start off by saying that I don’t have a problem with this study – I think it’s useful, I think it’s interesting, and I am fairly certain I will come back to it again and use it in real life.  My issue is with the conclusions that have been drawn from it — mostly in all of those news stories, but also by most of the people who tweeted, facebooked or tumblr-ed those articles. 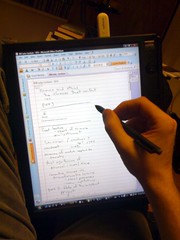 Reading the actual study – there’s nothing in there that says much about the medium.  Beyond the fact that most people type faster than they write, and therefore can get closer to transcription on a laptop, there’s really nothing at all.  What the study found was that if you transcribe, you don’t learn as well and, as they point out themselves, we knew that already.

There’s definitely no way one could consider the Just Say No to Transcription intervention in Study #2 “teaching” — this study surely did not prove that people can’t take good notes with laptops, it only suggested that they don’t.

There’s nothing magical about taking notes by hand that makes people process and think and be cognitively aware of what they’re doing — if that’s all you have and you want  good notes, over time you will figure that out because you can’t write fast enough to transcribe.  But that’s not magic, it’s motivation.  It’s still a learned behavior, even if the teacher could remain blissfully unaware of that learning.

And when we learned how subject headings worked, or that we could find more sources by using the bibliography at the end of the book, or that the whole section where that one book was had interesting stuff, or that both the article title and the journal title were important — learning that stuff wasn’t the point and we might not have noticed that learning.  But we learned how to think like the people who organized and used the information because learning that was the fastest and easiest way to getting our papers done.

(Hey, do you think that when copy machines were invented, and we could just make a copy of the article instead of having to read, digest and take notes on it in the library people argued for No Copy Machines?) 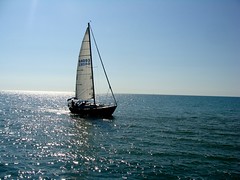 Even if we take laptops out of the classroom, I don’t think that students will feel like they have to learn how to think about, digest, remix and capture their thoughts about a lecture in order to function.  I think that ship has probably sailed, that horse is out of the barn, that genie’s out of the bottle.

If a student knows they can record the lectures on their phone, or if the slidedeck and lecture notes are posted before every class, they’re not going to feel like they have to get it down or risk failure.  And if the lectures are already recorded and re-watchable in a flipped or online class — they’re not going to suddenly think they need to be flexing their best cognitive muscles because they have a pen in their hand.

I don’t hear the “put the barriers back up” when it comes to digital information from instruction librarians much anymore.  And I think it’s fair to say that I’m hearing it less from faculty too.  But I still worry when I see things like the coverage of this study — because it’s not like I disagree that things are getting lost when these barriers come down.  Skill type things, tacit knowledge type things and also habits of mind type things — the tools I had to work with as a young learner left me with a lot that still serves me well now, when I have better tools. If my students can’t learn those things the way I did – and they can’t — how will they?  I don’t think answers like “ban laptops,” or “just use a pen” are going to get them what they need.

reading my notes. Some rights reserved by gordonr (flickr) https://www.flickr.com/photos/gordonr/430546423/