I feel odd weighing in here, because I have actively not joined the conversation on twitter.  Between a conference, putting one project to bed and ramping another one up – I knew that I would not be able to keep up there so I consciously stayed away.  And I also knew that I needed some more time to think and process Meredith’s excellent post. 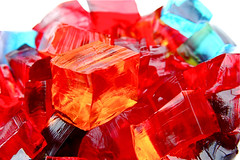 One of the problems I have with any discussion of librarian tenure is the nailing jello to the wall problem — when everyone is describing a different piece of the elephant it’s really hard to keep your footing in a discussion about a constantly shifting landscape.

Damn. I can’t think of any other metaphors to throw into that awful mix.

But you get my meaning – the conversations are almost inevitably pulled this way and that by the fact that we really in this profession have no consensus about what it means to be a tenured academic librarian.  We’re not inculcated into a tenure-valuing culture in grad school – not in the slightest.

And tenure for librarians is different things all at the same time.  Even within most of our institutions, we don’t know what being a tenured academic librarian looks like.  I’ve done a lot of external reviews where I get copies of standards that I should use for my evaluation.  Some are thoughtful and closely tied to the values and practice of librarianship. More  are not – they read like they’re trying to show librarians are “just the same” as everyone else. Many are neither of these – they’re lightly edited versions of campus standards (or totally not edited versions of campus standards).

Tenure standards do vary from place to place, and the culture around tenure varies from place to place — for all disciplines and fields.  But for us, it’s kind of all about that.  When you don’t have a sense out of grad school of what a tenured person in your field does, or what the value of tenure is, and when these conversations aren’t happening for you and yours in other places — then the tenure experience becomes all about the local institutional culture. I can say that tenure gives me a clear message that my professional activity is valued and you can say tenure hamstrings you and keeps you from engaging in that way.  We’re both right.  I can say tenure’s awesome because it protects professional activities for everyone, you can say tenure’s the worst because it doesn’t.  We’re both wrong.

Many of the conversations about tenure end up being about the state of scholarly publishing in LIS, and I’m not really going to go there. Except kind of. It’s confusing. Maybe I should keep thinking about this some more.

See, I get why conversations about tenure go straight to publishing; the one thing everyone knows about people who get tenure is that they publish stuff. You don’t publish enough or you don’t publish the right stuff, you lose your job.  You do publish enough stuff and the right kind of stuff, and you get rewarded with tenure, which means keeping your job.  But I’d like to see these discussions going beyond issues of rigor and volume — because at heart, those are still holding up other people’s research as the standard by which ours is found wanting.

Barbara said what I was thinking in the initial discussion –

And Maura picked it up —

As academic librarians we have a view of the scholarly publishing landscape that other faculty may not share, and I hope we can use this position to advocate for tenure requirements that take into account more of the possibilities for contributing to the creation and propagation of knowledge than peer review and impact factor alone.

So many people’s tenure experiences seem to reduce to what “counts” — with the subtext being that the stuff I do with real impact is different than the stuff that “counts” for tenure. And that makes me wonder why doesn’t it count?  Who decides what counts?

Sometimes yes, there are bad institutional cultures that stipulate a single pathway to tenure and that’s a problem.  And not just for librarians because tenured artists should look different than tenured anthropologists should look different than tenured biochemists and so on, but it might be a bigger problem for librarians for reasons I’ll get into in a minute.  But I honestly don’t think that’s the only thing in play here.

We worry so much about being taken seriously as academics in general, and tenure-line academics in particular — sometimes the subtext I hear is that we have to make ourselves look like (what we think) “real” tenured faculty look like or they might just notice us and take it all away.  So we have to publish in similar journals and format our articles with methods sections even when we didn’t do any research.  And I can’t help thinking that some of the time those assumptions about what we need to do are just that, assumptions.

Part of this is perhaps coming from a cynical place – I don’t think we’re doing a great job of looking like people who spend more than a quarter of their time on research anyway so clearly the rest of the faculty on a lot of our campuses aren’t looking all that closely if that’s really what they demand. And seriously, after years of hearing that I had to have ALA committees to get tenure — do I really think my colleagues in the disciplines are moved by the fact that I was the co-chair of the committee on committee nomenclature of the fourth-largest division in ALA?

But most of it is more optimistic.  Our campus colleagues already know we’re not just like them – they know our profession is different and that we’re approaching our shared mission from a different place. Maybe it’s because I’m at a land-grant institution where we have another substantial important group of tenure line faculty (in Extension) working on the question of “what does this mean in our field?” but I usually get the sense that no one here is expecting us to look just like everyone else.  Which should be giving us the freedom to really articulate what tenure means for us.  The answer to the question, “what should an tenured academic librarian do?” should resonate with our values and with what we think is good for our profession, our campuses, and the world.

And then, yes, it’s on us to make that case — but that’s part of what being faculty means.  Whether or not you have tenure, but as Barbara said, it’s especially a responsibility for those who do.

For me, one of the important aspects of any answer to that question has to do with the fact that we are not just researchers – we will never be just scholars.  We are also practitioners.

A4: I think we can’t teach theory separate from practice. Librarianship *is* the two together. That’s why I love it. #critlib

That’s why I love it too.  And that’s why I can’t imagine a good answer to the question “what should a tenured academic librarian be” that doesn’t reflect that.

At OSU, our tenure standards call this out.  Full disclosure — I worked for almost two years on this project with my colleague Janet, who remains the librarian I most want to be when I grow up  — and I’m pretty happy with it:

“Scholarly activities” are defined broadly and reflect the connection between theory and practice:

This doesn’t make tenure fun, or painless, to earn.  The year you’re putting your dossier together is still awful.  It is. The process makes you think about everything you didn’t get done and everything you didn’t do as well as you would have liked. There is still a lot of anxiety.  In the balance between scholarly freedom and clarity we probably skew to freedom and that’s really stressful for some of us — and it really favors those with a certain kind of confidence (or arrogance) about the process going in.

And it has by no means resolved those questions about “what counts.”  They still come up –sometimes in conflict with administration and sometimes because even though we are librarians who value consensus — we do not always agree.  But in the conversations we had while we were adopting these standards it became clear that we do agree that many things should “count” and that we value librarians who who contribute to the profession in many ways, and who write and speak to many audiences.  We value librarians who engage in both research and practice and who have impact in both.  We also agree that we value open access and that we value collaborative work — and both of those values are present in our standards as well.

And here’s the thing – if we were able somehow to fix the rigor problem in the LIS literature.  If we got the training in graduate school and if we had the skills and the disciplinary consensus it would take to establish rigorous methodological standards and required that, and only that, for practicing librarians to earn tenure — I think we’d lose something and I don’t think we’d gain what we wanted in the process.

I have the skills, experience and time to do smaller, qualitative studies rigorously (albeit slowly) and now that I have tenure I can focus on those. And because my library will recognize and reward it as part of my tenure package, I can also look for outlets that will let me communicate case studies and practice lessons in a way that makes sense and that reaches the right audience.  And sometimes, not always, I am going to skip the IRB on my student learning assessment project because the value of being able to communicate more broadly isn’t going to outweigh the benefit of having actionable data to work with sooner and I don’t need to worry about generalizability (And that’s a perfect world scenario for me – a world where I have the time and capacity to get an assessment project right.)  Sometimes, not always, I’m going to skip that prestigious conference because I have a chance to do a professional development workshop for the faculty on my campus.

And that’s what I think tenure should look like for academic librarians – not in our details, but in the broader strokes.  I think it should reflect that we participate in and communicate to multiple audiences.  That our choices are going to skew towards research this time and practice next time. That we contribute to both our discipline and our profession.  But it shouldn’t look like practicing librarians fixing the research problem in LIS – the people who are paid to prioritize research are going to have to help us out there.

Tenure matters for me.  I’m glad I have it.  I probably don’t need it, but it does matter to me.  It matters to me because when those “what counts” conversations happen, I don’t have to worry about what administration thinks before I say what I think.  It matters to me because I enjoy doing research.  I enjoy preparing conference talks.  I enjoy writing this blog, when I have something to say.  If I didn’t know that my institution rewards those things with tenure it doing them at work would always feel a little bit like cheating.  It matters to me because it makes me feel protected.  When I decide to go through the IRB, or to submit that conference proposal I know my institution will have my back with what I need to follow through on those commitments.  I know this isn’t what it means for everyone, but it’s what it means for me.

One thought on “Practice & the tenure question”